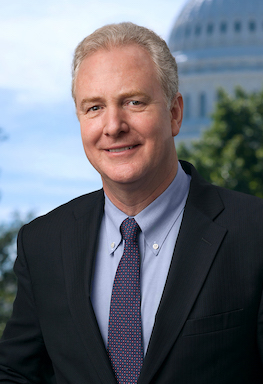 Maryland Senator Chris Van Hollen was first elected to the Senate in 2016, after 14 years in the U.S. House. He became involved in social justice movements and political action at an early age as the son of two dedicated public servants, committed to making the world a better place. Senator Van Hollen is dedicated to demanding equal rights, equal justice, and equal opportunity for everyone. He firmly believes in every child’s right to the opportunity to pursue their dreams and benefit from a quality education, and that anyone willing to work hard should be able to find a good job. Senator Van Hollen is also a tireless advocate for addressing the growing inequalities in America and will continue to create an economy and a democracy that works for everyone, and for reforms to our immigration system that reduce harmful enforcement and protect immigrant communities. He is proud to have worked on bipartisan legislation to expand medical research, protect the Chesapeake Bay, fight childhood cancer, and pass the ABLE Act to assist families with children with disabilities.