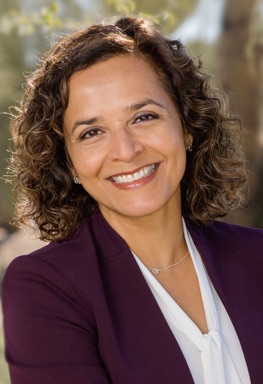 Dr. Hiral Tipirneni has dedicated her life to serving her community, solving problems, and improving lives. She’s served the Phoenix area for more than 20 years as an emergency room physician, cancer research advocate and, most recently, on the board of directors of the Maricopa Health Foundation in support of the county’s public health care delivery system.

Hiral came to America from India with her family at the age of three, in the pursuit of the American dream. Following a childhood illness, Hiral was inspired to learn more about medicine and, after graduating from public school, she earned her medical degree at Northeast Ohio Medical University. After losing her mother and nephew to cancer, Hiral decided that she wanted to do more than treat patients one at time in the emergency room and directed her passion to focusing on advancing cutting-edge cancer research. After Donald Trump was elected and while witnessing attacks on the Affordable Care Act, she decided that she needed to do more and stepped up to run for Congress.

Last cycle Hiral challenged Rep. Debbie Lesko (R-AZ) in the 8th Congressional District (CD). Hiral came incredibly close to victory, losing by only 5 percentage points. It was an exceptional showing in a part of the state where Democrats haven’t won a congressional race since 1980 and marked her as a candidate to watch. We are thrilled that Hiral has switched to the neighboring 6th CD, which similarly represents Phoenix suburbs, to take on Rep. David Schweikert. AZ’s 6th district was a rare missed opportunity for Democrats in 2018. Its suburban voters are trending away from the GOP and it voted for Trump just 52 percent to 42 percent in 2016.

Hiral represents an excellent pickup opportunity for the Democrats, and will also serve as a key driver of Democratic turnout in Maricopa county, which will help PAC endorsee Mark Kelly defeat Sen. Martha McSally (R-AZ) for Arizona’s Senate race.