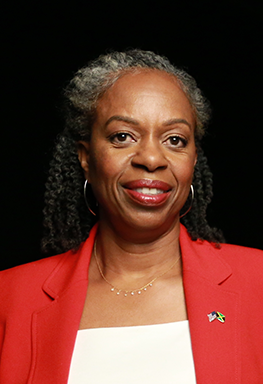 Jackie Gordon is determined to bring NY-02 the progressive representation it deserves after the years of moral failure which it has endured under the tenure of retiring Rep. Peter King.

Jackie is a combat veteran, an educator, a public servant, and a community leader who was born in Jamaica, West Indies, and grew up in Queens, NY. While in college and teaching in local schools, she enlisted in the United States Army Reserve. Jackie has held so many titles over the years, all of which reflect one constant in her life - a dedication to public service and bettering this country.

Jackie spent three decades working in New York public schools, and has earned degrees in education from Hunter College and Queens College. From 2007 to 2020, she served on the Babylon Town Council, where she worked to direct resources to veterans and military families as Chair of the Veterans Advisory Council and pushed for the revitalization of Wyandanch Village, which has breathed new life into the community.

If elected to Congress, Gordon will strongly support voting rights expansion, fight against oppressive voter ID laws, and support making Election Day a federal holiday. Moreover, Gordon is dedicated to enacting criminal justice reform, including ending the use of private prisons. Gordon is outcomes oriented, and will work to strengthen re-entry programs to provide support to newly released individuals in order to reduce recidivism. Quality public education is also central to Gordon’s ideology; as an educator, it’s imperative to her to dismantle the school-to-prison pipeline.

In 2020, we have an opportunity to not only preserve, but expand our Democratic House majority. This race plays a key role in this strategy, as this is a battleground district and an open seat for the first time in 28 years.