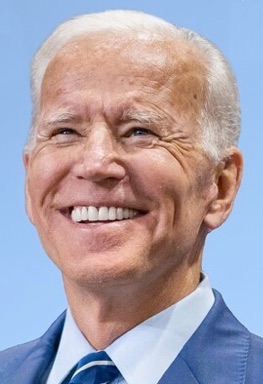 President of the United States

Joe Biden is a former U.S. Senator (D-DE), the 47th Vice President of the United States, and will be sworn in as the next President of the United States on January 20, 2021. As a lifelong advocate for civil rights and a tireless fighter for justice, President-Elect Biden will work to ensure that everyone in this country is treated with dignity, and has an equal opportunity to prosper – no matter their race, religion, ethnicity, gender identity, sexual orientation, ability, or zip code.

From the very first day of his campaign, President-Elect Biden made clear that he understands the danger of the white nationalist movement, and that having a white supremacist President in the White House fuels that movement. We know Biden will make the fight against white nationalism a top priority. His relationship with the American Jewish community is longstanding and, in many ways, Donald Trump’s horrifying implicit endorsement of antisemetic and racist violence in Charlottesville actually inspired him to run. This fight is for the vision of an America where all are equal and free, and in Joe’s eyes, “very fine people on both sides” was the last straw.

Joe Biden is committed to stripping white nationalism out of our body politic, root and stem. He is our best hope to dismantle the machinery of hatred and violence which Trump and the GOP have built and has proposed a bold set of policy initiatives to do so. On immigration, we know Biden is fully committed to stopping family separation and reuniting children with their parents, ensuring access to counsel in immigration courts, reversing Trump’s public charge rule, ending the so-called National Emergency Declaration that Trump used to siphon federal dollars to his wall and protecting Dreamers and their families.

On voting rights, Joe Biden will strengthen our democracy by guaranteeing that every American’s vote is protected. He supports automatic and same-day voter registration and will ensure that the Justice Department has the resources and authority to enforce laws that protect our voting rights. Joe Biden believes we need to end gerrymandering, and protect our election security and access to voting booths and voter rolls. And, his Administration will incentivize states to automatically restore voting rights for individuals convicted of felonies once they have served their sentences.

And that is just a small snapshot of the ways we know Joe Biden will fight for the progressive domestic policy priorities of our community. Jewish Americans must work to elect Joe Biden not only because our safety is compromised by President Trump, but because of the values that we learn from our history and our tradition. This election is one of the most important in our lifetimes, and it is imperative that we do everything we can to ensure Joe Biden’s victory in November.