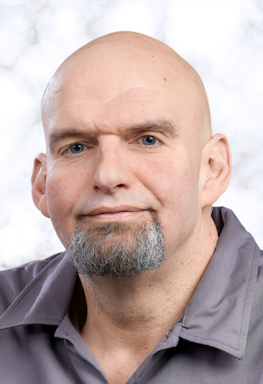 John Fetterman is the current Lieutenant Governor of the Commonwealth of Pennsylvania and is running to replace retiring Republican Senator Pat Toomey. Previously, he served for 12 years as Braddock, PA’s mayor, having moved there to serve with AmeriCorps teaching GED students, and later working to rebuild the aging steel town’s economy and community. In 2018, Fetterman won a five-way primary for Lieutenant Governor and then ran on a ticket with now Governor Tom Wolfe, winning by 17 points. As Lieutenant Governor, Fetterman has been a strong advocate for fixing our criminal legal system, leading the charge to free wrongfully convicted individuals and giving second chances to formerly incarcerated people. Fetterman has fought for causes core to his beliefs, including immigration reform and advancing LGBTQ+ rights, even officiating one of the first same-sex marriages in the Commonwealth.

In November, John Fetterman will face infamous New Jersey resident Dr. Mehmet Oz for this competitive Senate seat — a race that is critical to preserving Democratic control of the Senate. Fetterman is running to be a tireless advocate for the people of Pennsylvania and instrumental in championing progressive policies. This is a top pickup opportunity to expand Democratic control of the Senate and move beyond the constraints of the filibuster, allowing for increased opportunities to pass critical legislation.