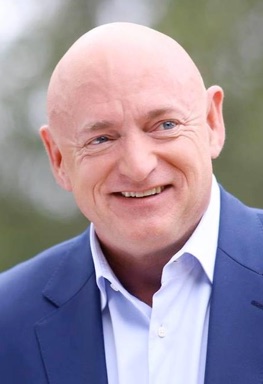 Senator and Astronaut Mark Kelly was at the center of one of the highest-profile and most competitive U.S. Senate races of the 2020 cycle. Kelly, who challenged and defeated incumbent Arizona Senator Martha McSally, was the perfect candidate to win this seat — in addition to being an astronaut, he’s also an engineer, veteran, political activist, and the husband of former U.S. Representative Gabby Giffords (AZ-08).

Mark attended public schools from elementary school through the U.S. Merchant Marine Academy and U.S. Naval Postgraduate School, becoming a naval aviator and making two deployments in the First Gulf War, where he flew 39 combat missions in Operation Desert Storm. Kelly was selected as an astronaut in 1996 in the same class as his twin brother Scott.

When Congresswoman Giffords was shot and nearly killed in a 2011 assassination attempt, both she and Kelly became key voices in the fight against gun violence which played an outsize role in the 2018 midterms. Throughout his 25 years in the Navy and NASA, Kelly had a proven track record of solving tough problems by bringing people together. As Kelly said in his announcement video, “partisanship, polarization, gerrymandering, and corporate money have ruined our politics, and it’s divided us…and we are seeing a retreat from science and data and facts.” Kelly is determined to bring the people of Arizona together and is committed to fighting for equality and justice in Arizona and nationwide.