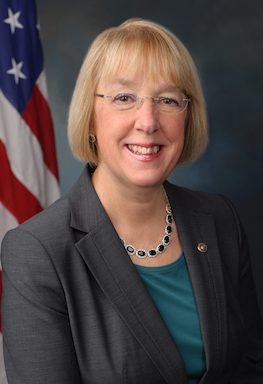 As one of seven children, Sen. Murray learned the value of a strong work ethic and a country that supports those who fall on hard times. Her family was aided by the VA, food stamps, and student loans after her father’s multiple sclerosis diagnosis when she was a teenager. As a grassroots organizer and school board member before being elected to Congress, Sen. Murray knows the value of public education and is known for her tireless work to accomplish realistic goals and to expertly articulate how complex issues affect every day American families. In the Senate she remains committed to investing in people, communities, and their futures to rebuild a stronger middle class and to use every tool available to help people, and offer a clear and loud voice for progressive change. Senator Murryay has been on the front lines of the resistance in the last four years, fighting back against every anti-worker, anti-woman, anti-immigrant, anti-public education, anti-middle class, and un-American policy. She will continue to be a relentless advocate for progressive change in the years to come.