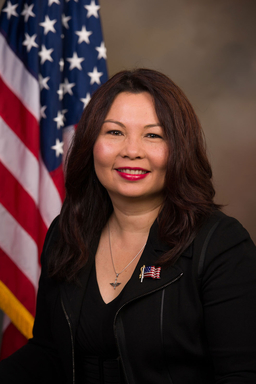 Illinois Senator Tammy Duckworth is an Iraq War Veteran, Purple Heart recipient, former Assistant Secretary of the U.S. Department of Veterans Affairs, and former member of the U.S. House of Representatives. Senator Duckworth was among the first handful of Army women to fly combat missions during Operation Iraqi Freedom, serving in the Reserve Forces for 23 years before retiring at the rank of Lieutenant Colonel in 2014. In 2004, Sen. Duckworth was deployed to Iraq as a Blackhawk helicopter pilot with the Illinois Army National Guard, where an RPG hit her helicopter, causing her to lose her legs and partial use of her right arm. While and after recovering, she quickly became a passionate advocate for her fellow soldiers and veterans, for improving and creating jobs, a first-in-the-nation 24/7 Veterans crisis hotline, housing, and health care as Director of the Illinois Department of Veterans’ Affairs.

As an Assistant Secretary of Veterans Affairs, she worked to help end Veteran homelessness, including the unique challenges faced by women and Native American Veterans. In the U.S. House and Senate, Sen. Duckworth also fights for working families, job creation, and reducing veteran suicides. She seeks to rebuild our crumbling infrastructure, grow manufacturing jobs while supporting minority-owned small businesses, invest in long-ignored communities, and make college more affordable for all Americans. In 2018, after Sen. Duckworth became the first Senator to give birth while serving in office, she secured a historic rules change to allow Senators to bring their infant children onto the Senate floor. As Senator, she advocates for practical, common-sense solutions needed to move our country forward and will continue to fight to create a more just and equitable multiracial society that works for us all.