Help elect Rev. Raphael and Jon Ossoff so Democrats can take control of the U.S. Senate. 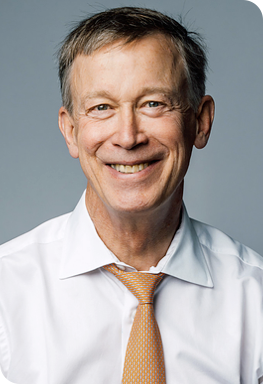 John Hickenlooper started his career as a geologist, but after being laid off, he decided to open a restaurant in Lower Downtown Denver. The result was Colorado’s first brewpub and a big hit – inadvertently playing a key role in the US microbrewery boom. John started seven more small businesses and employed hundreds of Coloradans. After becoming a leader in his community, he decided to run for Mayor and won as a first time candidate, going on to eventually become one of America’s most popular governors.

As Governor, John helped to move Colorado from ranking 40th in job creation to the number one state economy in the nation. He brought people together across the aisle and across the state and got things done, from passing pioneering anti-pollution measures to fight climate change and landmark gun safety laws to expanding Medicaid to nearly 400,000 Coloradans. Now John is running for Senate against Republican incumbent Sen. Cory Gardner, who is regarded as the most vulnerable member of the GOP in Congress.

John credits his electoral success to his straightforward and genuine nature. He is our best chance at defeating Republican Sen. Cory Gardner and picking up a Senate seat this cycle. From lowering health care and prescription drug costs to gun violence prevention, protecting the state’s public lands and combating climate change, and ensuring that our immigration system is fair, humane, and equitable, John is looking to fight for values that progressives hold dear. If he does not succeed, then it’s hard to imagine a scenario where Senator Mitch McConnell doesn’t remain Majority Leader.