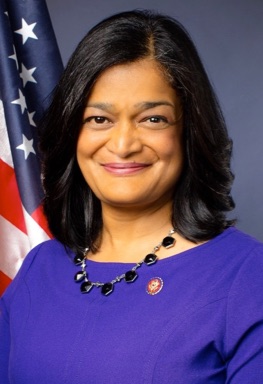 Making history in 2016 as the first South Asian American woman elected to the U.S. House of Representatives, Congresswoman Pramila Jayapal has become one of the most influential, iconic, progressive, and tireless fighters for justice in Congressional history, all in 3 short years.

Prior to being elected to Congress, Congresswoman Jayapal worked for decades in global public health and as an award-winning national advocate for women’s, immigrant, civil, and human rights. Congresswoman Jayapal founded and served as Executive Director of OneAmerica, the largest immigration advocacy organization in Washington State and one of the largest in the country.

In Congress, Congresswoman Jayapal has been a leader on issues relating to immigration, income inequality, healthcare, and climate justice, authoring landmark pieces of progressive legislation including the Dignity for Detained Immigrants Act, the National Domestic Workers Bill of Rights, and the College for All Act. Congresswoman Jayapal has also championed legislation implementing a federal $15 minimum wage, expanding collective bargaining rights for workers, and transitioning our economy to 100% clean energy.