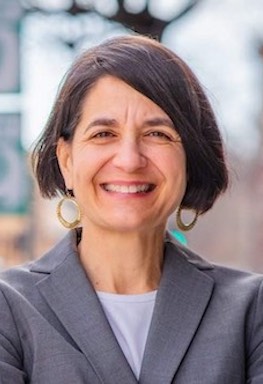 Candidate challenger Becca Balint is a mother, teacher and progressive leader who has had to fight her whole life as an outsider. Becca’s innate sense of justice has driven Becca her entire life – first as a middle school teacher in Windham County for 14 years, then as an activist and State Senator who became the first woman and first openly gay person to serve as President Pro Tempore in the Vermont State Senate

Becca is a fierce advocate for justice and equity, and her values were shaped by her family’s experiences. As the daughter of an immigrant dad and a working-class mom, her parents never took for granted the rights and privileges provided by the Constitution. Her grandfather was killed in the Holocaust, and her father’s family saw firsthand the cruelties people can perpetrate when the law does not protect the most vulnerable, or when people turn away from each other and refuse to confront burgeoning division in their communities. Becca is running for Congress to protect our fragile democracy, and ensure that it outlives all of us. Additionally, she knows Vermont alone can’t solve the problems of housing, healthcare, and the suffering of working families. If elected, she will fight to develop bold, national solutions to solve the crises facing our nation, from housing affordability to medical debt to economic inequality and racial disparities.