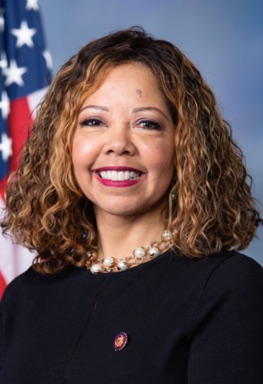 Congresswoman Lucy McBath pulled off one of the biggest surprise upsets of 2018 when she flipped Georgia’s 6th Congressional District – Newt Gringrich’s old seat – and defeated Republican incumbent Karen Handel. Rep. McBath is the first black woman ever to be elected to this congressional seat and is one of the few minorities representing a majority white district. She re-defeated Karen Handel in 2020 by more than nine points.

As a mother, a two-time breast cancer survivor, and an outspoken advocate of gun violence prevention measures who was driven to national action following the fatal shooting of her son Jordan Davis, Rep. McBath is a living manifestation of the fight for social justice.

After a 30-year career with Delta Airlines, McBath’s life was irrevocably changed after her son, Jordan, was murdered by a man who complained about the music on his car radio while at a gas station in Florida. Fueled by this tragedy, McBath devoted herself to the fight for safer communities and gun violence prevention, becoming a national spokesperson for Everytown for Gun Safety and Moms Demand Action, speaking at the 2016 Democratic Convention on the epidemic of gun violence in America.

Following the Parkland shooting in 2018, McBath was once again moved to act, running for Congress in her home district. “Championing for them in Washington is still championing for my child,” McBath told The Washington Post. McBath defeated Republican Karen Handel 51%-49%, becoming the first Democrat to win that district since its redistricting in 1992.

McBath now serves on the House Committees on Education and Labor, and on the Judiciary. It is crucial that Rep. McBath remains an incumbent, and Bend the Arc Jewish Action PAC is firmly committed to supporting the Congresswoman’s reelection in years to come.